The Clarksville-Montgomery County School System has a focused effort on improving student achievement for the 33,050 pre-kindergarten through twelfth-grade students it serves. CMCSS continues to be recognized nationally for its academic and professional achievements, as well as its progressive methods for helping students become college and career ready. Last year, the system was number one in the state for academic growth.

CMCSS continues to develop and strengthen a variety of programs for ensuring student success. After-school programs, innovative approaches in programs like a virtual high school and credit recovery, as well as other intervention and transition programs for children in elementary, middle and high school provide students with greater learning advantages and opportunities to stay on track with their peers. With the increased rigor in academic areas, students on all learning levels can benefit.

Thinking outside of the box, the school system started college and career academies in each of the high schools, a Middle College High School on the campus of Austin Peay State University, and a four-year academy for Science, Technology, Engineering, Mathematics (STEM) housed within Kenwood High School. CMCSS was named a “District of Distinction” last year by District Administrator magazine. Two high schools are listed in U.S. News and World Report among the best high schools in the country.

The seventh largest school district in Tennessee, CMCSS opened its thirty-ninth school, Oakland Elementary, in August 2015. Approximately 28% of the students served in the school system are military dependents – nearly twice as many as are served by the Fort Campbell Schools. Also, CMCSS earned a 100% score as part of the “Safe Act” state requirements.

CMCSS is one of a distinguished group of school districts earning whole district accreditation from the AdvancEd International Accreditation, which includes Southern Association of Colleges and Schools. The School System has earned ISO-9001:2008 Certification which is an international standard for quality management recognized by professional organizations and industries worldwide. The student graduation rate has risen steadily over the last seven years and was 96.5 percent in 2015, among the highest in the state and the nation.

Private schools in the Clarksville-Montgomery County area offer a choice for parents seeking an alternative to the traditional school system. Each has distinctive characteristics that meet the different needs of individual students.

Tennessee Promise is both a scholarship and mentoring program to increase the number of students that attend college in our state. The scholarship covers tuition and fees not covered by the Pell grant, the HOPE scholarship, or state student assistance funds. Students may use the scholarship at any of the state’s 13 community colleges, 27 colleges of applied technology, or other eligible institutions offering an associate’s degree program.

Each participant receives a mentor who assists the student as he or she navigates the college admissions process. Tennessee Promise participants must complete eight hours of community service per term enrolled, as well as maintain satisfactory academic progress (2.0 GPA). #TNPromise

Austin Peay State University Is A Comprehensive University Committed To Raising The Educational Attainment Of The Citizenry, Developing Programs And Services That Address Regional Needs And Providing Collaborative Opportunities That Connect University Expertise With Private And Public Resources. Apsu Prepares Students To Be Engaged And Productive Citizens, While Recognizing That Society And The Marketplace Require Global Awareness And Continuous Learning.

Named for Clarksvillian and former Tennessee Gov. Austin Peay, APSU is one of the region’s key economic engines, with an economic impact of more than $333 million annually. Austin Peay’s beautiful Clarksville campus is located on over 180 acres in downtown Clarksville.

Established in 1927, today’s student enrollment is 10,099. Students at Austin Peay can choose from numerous programs and concentrations to earn an associate, bachelor’s, master’s or Education Specialist degree. With more than 20 graduate degrees, over 45 undergraduate degrees and several associate degrees, many of which are offered in eight-week terms or traditional 15-week semesters. With classes offered on three campuses (downtown Clarksville, Fort Campbell, and Springfield) and online, traditional and non-traditional students have the opportunity to achieve both graduate and undergraduate degrees in a way that fits their busy lifestyle. 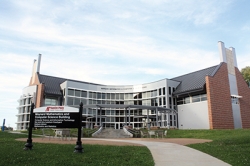 In November 2014, APSU opened the new $6.7 million Maynard Mathematics and Computer Science Building on Eighth Street. Additionally, the University reopened Governors Stadium in September 2014 after a $19 million renovation. In April 2016, APSU announced a 25-year partnership with Fortera Credit Union to rename the home of APSU football to Fortera Stadium.

Currently, construction is underway on a new $21.3 million, 46,000-square-foot Art and Design Building. The new building will feature faculty office space, general purpose classrooms, a multifunction room, art studios, a photographic studio, a general art gallery and a student gallery. Construction is expected to take a year and the new building is slated to open in the spring of 2017.

APSU recently completed a purchase of property previously owned by the Jenkins and Wynne auto dealership. The $8.8 million purchase marks one
of the largest expansions in the University’s history, and it now connects the 182-acre College Street campus with downtown Clarksville.

Currently, APSU is in the process of developing 28 new degree programs, including its first doctoral programs.

The Clarksville-Montgomery County, Tenn. Economic Development Council (EDC) Executive Committee is pleased to announce they have received commitment from Jeff M. Truitt, 46, of Clarksville, to fill the position of Chief Executive Officer.

With the recent news that the State of Tennessee now ranks number five in the nation for median household income growth, it is time to take notice and pay attention to how Clarksville-Montgomery County stacks up.